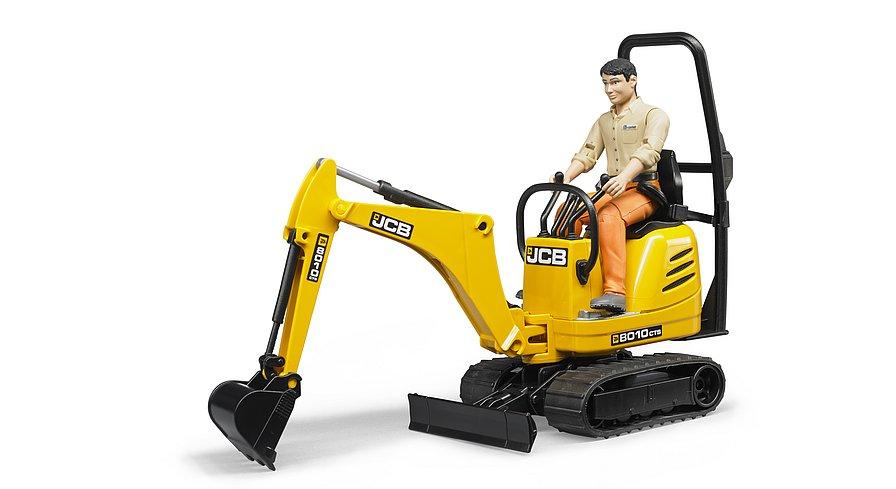 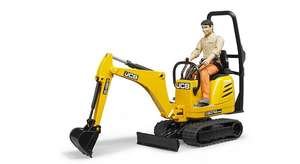 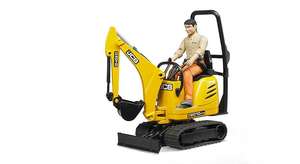 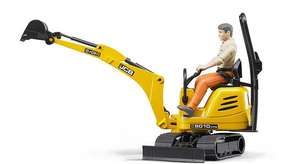 • Hands can grasp objects or hold onto vehicles

• The colour of the clothes varies

• The individual characters are differentiated by hair colour, colour of clothing and footwear

• Likeable character with an impression that is as realistic as possible

• Parts colours are of dyed plastic, printing on several points on the head and body

• Seat with retaining clip so the figure sits securely

• Excavator attachment swings by 360? on the turntable

Small enough to fit through the tiniest gaps, strong enough to do the work of ten men! The JCB micro excavator 8010 CTS is a remarkable machine. Remarkable not just due to its size, but also because of its colossal power. The micro excavator?s equipment is true to detail, including the fully functional excavator arm, the rotatable chassis and the movable blade. The vehicle is perfectly suited to the figures of the BRUDER bworld series thanks to the seat with support bracket and the adapted control instruments. The JCB micro excavator 8010 CTS also has smooth-running tracks to allow playful manoeuvrability. A bworld series figure is also in-cluded with the micro excavator. This allows work to begin on the construction site as soon as you have opened the packaging.

Worker was not as described, no boots, a quick phone call sorted it out and I was sent an extra worker with boots for no extra cost, great communication, this company is second to none, grandson will

Was bought as a present but looked good quality